With Summer just around the corner, get to know our awesome Partners over in the US and Europe who can help you with all your hydrofoil bike needs.

First up, the team at Copenhagen Cycles (with a pretty great story about their second ever foiling experience, some fishing line and the prop…)

1. Tell us a bit about yourself and the team at Copenhagen Cycles!

Every morning I cycle to work, because I love cycling! That’s how I started my TED Talk in 2014, because riding a bike has been with me all my life and it has come to define who I am. I’m not much of a sports cyclist. I never compete in races, and I don’t own a race bike, but I also don’t own a car. I go everywhere by bike.

Cycling to work in the morning gets me ready for the day. It connects me with my city, my fellow citizens, and it feeds my brain with oxygen and impressions, which I have really come to depend on. Take it away from me and I don’t function so well… 7 years ago we were moving office, I had two criteria: It had to be a minimum of 5km from my home, and it had to be next to the water. I found the perfect spot on a small island in the Copenhagen harbour, which would allow for a decent bike commute and everyday swimming – all year around.

In 2012 I combined my passion for cycling with a full time occupation, when I started the non-profit organisation Cycling Without Age. It’s a movement aiming to help elders beat loneliness and social isolation by inviting them on social trishaw rides. It really caught on and today we have chapters in 2,500 cities in 50 countries serving more than 1.5 million beneficiaries. It warms my heart to see how elders form new bonds when they get to venture out of the four walls by bike and feel the freedom they had before reduced mobility got them stranded.

In order to help affiliates get on wheels all over the world, I set up Copenhagen Cycles in 2016 as a social enterprise, whose purpose was dual: To supply trishaw bikes to chapters and to raise funds for the important work of Cycling Without Age. Copenhagen Cycles makes a donation for each sold bike, and gives all its profits to the non-profit.

We’re 3 people at Copenhagen Cycles: Pernille, Ciara (also both hardcore cyclists) and me (Ole), and by now we have gained a lot of experience selling, shipping and servicing bikes all over the world through partnerships with bike dealers and local chapters of Cycling Without Age. Pernille (my partner) and I split our time between Copenhagen Cycles and Cycling Without Age, and we have had the privilege of visiting chapters in over 25 countries over the past couple of years. Ciara (my daughter) lives in Málaga, Spain and runs the online business looking after customers and suppliers.

In March of 2018 I first heard about the Manta5 Hydrofoiler and was very intrigued. It seemed to perfectly combine my passion for cycling and water, and in September 2019 I ordered my first Manta5 and we decided to make it part of our range of interesting bikes in Copenhagen Cycles.

2. What reactions have you seen to the bikes in Denmark so far?

The bike arrived just before the end of the 2020 season, but we still managed a good one month of activities before it got too cold. The reception has been very enthusiastic, which is hardly surprising since we live in the cycling capital of the world (at least that’s what Copenhageners will tell you). We had a number of events and filled all the slots for trying out the bike. I quickly learned the ropes myself and was then able to train others, help them launch from jetties and we had a near 100% success rate, which was very encouraging.

Our rides have mainly been in the Copenhagen harbour, which has given us a lot of exposure to random bystanders, and one image was caught by a social media influencer in Copenhagen and went viral for a few days. 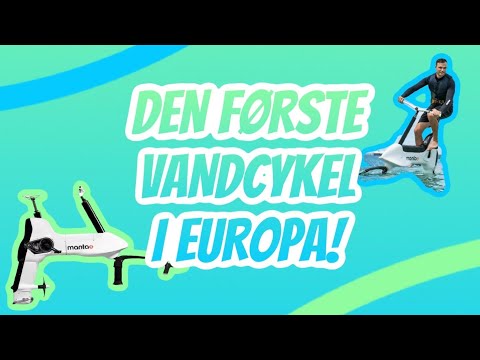 3. What has your experience with the Hydrofoiler XE-1 been like? How do you feel it compares to traditional cycling?

It’s remarkably similar to normal land cycling (I guess I would now have to call it that..) with the added sensation of flying low above the water. It really gives me a kick and an awesome sense of freedom. I can head out and play around with other vessels on the water like kayaks, small boats and SUP boards. In fact there is already a kind of kinship between Hydrofoilers & kayakers in our local marina, and most of the members showed up at the events and gave the hydrofoil bike a go. They liked it a lot and our local club is intent on buying a Manta5 for their members.

4. How long have you been involved with Manta5 as a Partner? What made you move towards this opportunity?

As soon as we had ordered the first bike, we decided that it had to be perfect for both Copenhagen Cycles and for Denmark (being a small cycling nation surrounded by water), so we signed up as Partners even before the bike had arrived.

5. Tell us about your most epic water or cycling experience! (does not have to be Manta5 related)

On my second ever day of riding the Manta5, I decided to ride it 5km from our waterfront office in Copenhagen to the jetty next to my inner city apartment.

I knew I could do it, although I could only just master the jetty launch, so I took off together with a small group of kayakers from the local club. It all went really well for the first 10-15 mins until I suddenly spotted a handful of anglers with their fishing lines stretching way out into the water right in front of me. I saw it too late, and they didn’t have time to pull in their lines, and the prop got caught on one of the lines.

I silently begged that it would quickly snap and that I could continue, but slowly but surely it became harder & harder to pedal and after less than a minute it ground to a halt and the bike slowly submerged. I hadn’t yet mastered the deep water launch, so I started swimming, pushing the hydrofoil in front of me. I knew that a small jetty would be maybe 500 meters, but it felt really far.

Suddenly my friends, the kayakers, appeared behind me and offered to pull me down to the jetty. I grabbed a kayak and together we got to the jetty where I could pull out the bike and check out the damage… There wasn’t any apart from at least 10 meters of fishing line wound tightly around the propeller causing it to be completely stuck. Whilst trying to figure out how to get out and foiling again, a fishing vessel came in front of me and I helped the guy moor. He saw the bike and we chat, so I took a chance and asked if he happened to have a 17mm wrench (he did!). Soon enough I was unscrewing the propeller, removing the fishing line and back out on the water.

I have also been involved in a couple of amazing long rides with Cycling Without Age. After I started the programme in 2012, we started organising long rides with elders in 2014, and in 2015 we partnered with a chapter in southern Norway and started organising a 250 km, 4 day bike ride with 10 trishaws, 20 elders and 15 volunteers. It became one of the most memorable rides of my life, as we saw the zest for life and the glow in the eyes of the elders come back. We broke down all barriers between generations on that ride and all made friends for life.

If you’re keen to get your learn more and get your hands on a Hydrofoiler, get in touch with Ole and the CC team today.